The concert embraces a Ukrainian, Serbian, English and Russian classical and modern repertoire performed by award winning artists including opera singer Alla Kravchuk (soprano), Marina Petrov (piano) and Milos Milivojević (accordion). They will take you on a journey from Tchaikovsky and Quilter to Prokofiev’s beautiful songs, towards the lesser known works of composers such as Stepovy, Vlasov, Babić, Skorick and Semyonov. We are pleased to announce a World Premiere of the work Peony (‘Bozur’) by Serbian composer Vera Milanković, which she has arranged for the trio, specifically for this occasion. It will be an exciting opportunity to hear ensembles performing unique arrangements for voice, piano and accordion, as well as rarely performed vocal works and solo instrumentals from these esteemed musicians.

or bought at the door 30 minutes before the concert. 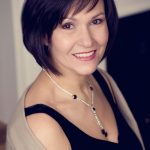 Alla Kravchuk is an internationally acclaimed opera and concert singer and is now also an established singing teacher based in St Albans.

She was a prize winner at the Llangollen International Eisteddfod, the Grimsby International Singers competition and was part of the winning production at the Moscow Golden Mask festival. In 2001 she became the principal lyric soprano of the Hanover Opera Company, Germany. During her ten years with the company, Allan sang a variety of roles including Pamina, Susanna, Cleopatra, Mimi, Michaela, Antonia, Despina, Nedda, Hanna Glavary, Ilia, Liu and Euridice as well as the title role in Debussy’s ‘Pelléas et Mélisande’.  She has completed numerous recordings including a new song cycle ‘Einzige Tage’ by the English composer Francis Pott, which was awarded ‘recording of the month’ by MusicWeb – international website. 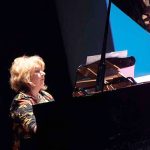 Marina Petrov is an award-winning classical pianist, educator, lecturer and writer who has been living in London for the last thirty years.

As a child prodigy since the age of 8 Marina has won many national piano competitions and festivals for young pianists in former Yugoslavia that followed by tours, media appearances including TV and Radio Belgrade shows.  During her long-standing pianistic career, she has played many recitals and hundreds of performances in prestigious concert halls around the UK, Balkan States and Eastern European countries. Further to her performing and teaching career, the versatile Mrs Petrov is also Co-Founder and Managing Director of Around the Globe Music & Arts and AGPMF Piano Competition as well as Executive Editor of Around the Globe Music Magazine. Marina’s talents are renowned in the British press including The Times and she is listed in International Who’s Who in Music since 1992 and British and International Music Yearbook (1996).

Serbian born Milivojević has been described as “A hurricane of imaginative invention” by Hilary Finch, The Times. His versatility as a musician performing different genres including classical, tango and world music. Miloš has studied at Royal Academy of Music with Professor Owen Murray and in 2007 became the first accordionist ever to win the RAM Club Prize. He is a first prize winner at International Competitions in Germany (Klingental), France (Grand Prix), Italy (Castelfidardo) and Denmark (Diremose Prisen). Miloš has given numerous live broadcasts on BBC Radio, Classic FM, ABC and the Serbian National Radio and television networks. His playing is featured on the Bollywood movie ‘Barfi’ and he has performed tango live in front of millions on the BBC’s Strictly Come Dancing TV programme.