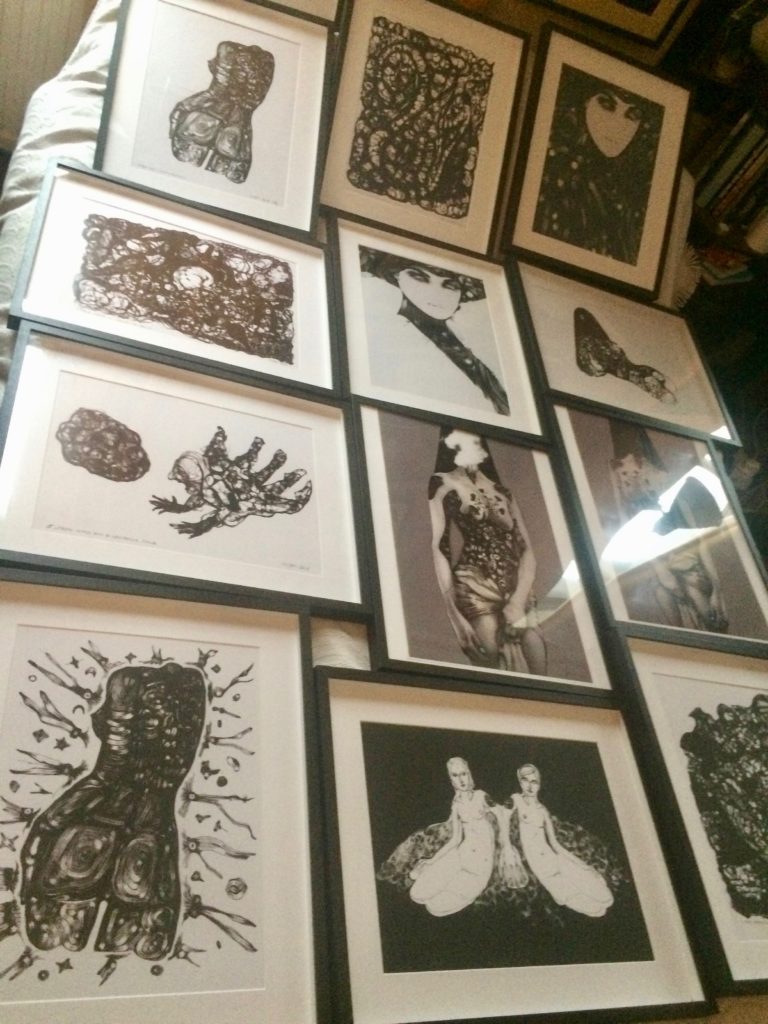 Latest Injac London solo exhibition showing his recent work
I describe my self as a Serbian Londoner, I am very excited to exhibit in a city where I grew up, studied and spent a better part of my life, London that I truly love is so special for me and Camden is one of those favourite spots.

ABOUT THE WORK
Prepare, Window, Now! is a series of works made at the beginning of 2018. The series is created by a reactive outburst of quick drawings that observe, relive, and intuitively sketch the spiritual and physical states present in the distancing, separating and parting of people. This topic may be naively honest but it is irreversibly timeless and has brought about the inspiration for these creations.

The first work in the series, “With No Name in Heaven or Hell”, forms the introduction to these states which are portrayed in a vortex swarming with faces, bodies and symbols. The work depicts what pulsates and travels through thoughts in slowed down moments that make human life full of challenges and temptations.

Collectively the compositions associated with a purgatory or ritualistic scene, with works also suggesting a mutated state of paired contrasts: dualisms between two versions of reality and the internal struggle of good and evil. It makes some kind of an entity whose vibrating expression is filling and emptying, gliding through a dream and passing through reality until the final fatigue of memory and feelings fade.

Windows open and relive, they reduce the self-glancing through aeration. The title of the exhibition, Prepare, Window, Now! is more like a “back title”, because the awakening of the inner self is in some way the destination of this creative transition. This series is hand-drawn using modern tools such as an iPad and Stylus and has been digitally printed on paper.

After moving to London in 1991, Injac received a place and studio at the Kingsway College of Art and Design, where he engaged in drawing, painting, sculpture, printing, photography. He received a BTEC diploma in 1995, and following an interview with Central Saint Martin’s (CSM) Head of the Painting, Michael Thorp, he was unconditionally accepted and received a scholarship at the Central Saint Martins College of Arts and Design, where he graduated in 1998 with a BA (Hons) in Fine Art Painting. During his studies, he examined contemporary forms of art: installation, audio, performance, and what was then pioneering digital expression, but he always remained close to his drawings and colours.

The rapid advance of technology in the 1990s saw the computer as a new tool for making and creating art. During his studies, Injac worked on the production of experimental electronic music and was a founding member of Symphonic Asylum. In the early 2000s, Injac broke from the materialization of fine arts, but not from overall creativity. He founded a multimedia digital studio under the name Locomotiva and worked in the London Digital World of design, music, animation and videos related to dance culture and the DJ scene. Following this, he returned to his artistic practice and to the art scene itself.

His interests are diverse, and his work is rooted in the topic of displacement with the elements of tragic-comic responses, focusing on questions of the contemporary alienation of human from the humane and man from humanity. As an artist, he is constantly re-examining himself and the space around him; the search and interpretation of various insights in the space and life he inhabits are the main drivers of his work.

He works in wide range of media and across several disciplines, but now more than ever he is reanimated by classical disciplines of art: drawing, painting and sculpture. Injac has exhibited in London at group and solo exhibitions. His works are held in several private collections around the world. Boris Injac